With another two months behind us, we are still making quite a bit of progress. The last time we blogged, we had the most productive span of time in the development of the game. This time around, we are on the same pace and it feels good to see the game progressing relatively quickly! We are all systems go getting this game ready for GDEX 2019 so get hyped, buy your GDEX tickets, and read on to see how greatly this game is progressing 🙂

To start, we fixed a few bugs which were prevalent in core gameplay systems:

As we continue to iterate on core gameplay and introduce new functionality, we slightly break other pieces of functionality so staying on top of bugs is a relatively high priority. Although it is still super early in the game’s development, we want anyone who plays our game throughout the process to have as bug free of an experience as possible.

Along with fixing broken functionality, we added new character functionality which diversifies movement even further! Introducing the dive jump: while in mid-air, players can now jump a second time to traverse even more of the level faster. This jump acts as a more horizontal leap than another vertical jump. The dive jump works in conjunction with other abilities like the slide to increase your character’s velocity, so try using this to get around the map even quicker than before.

Note that we do not yet have an animation for the dive jump just yet, but it should make a lot more sense visually when we do 🙂

Jetpack movement has been greatly improved as it now feels more like a flying system than before. The previous iteration of the functionality was a simple system that took raw joystick input and applied it to player speed, much like running in the game does. This allowed players to change direction in-air in an instant, which really does not feel like flying at all. In addition to this, the only force applied by the jetpack was vertical, limiting the player to the maximum run speed in terms of horizontal movement. Both of these pieces of functionality were changed to provide a much deeper jetpack movement system. Velocity is now tracked and manipulated so when players change direction, it takes a bit of time to slow down and move in the other direction depending on their current velocity. To accomplish this, we added horizontal movement velocity to the jetpack so it feels more like a movement advantage as you can fly around the level at speeds much faster than running. Try tapping the “jump” button to maintain a level flight and stay in-air longer.

Along with the jetpack, we have continued to improve the “jump kick” switch mechanic in the game. Since the jump kick is a teleport ability now instead of a physics-based movement ability, some important features were overlooked during the first iteration of the mechanic. Movement distance was not normalized, and players could sometimes teleport into objects if they were close enough. We have since improved this mechanic to ensure that no matter what angle a player was aiming at, they always had a max linear distance that they could teleport to. You can picture this max distance as a circle around the player, where before it was more of a square because we were not calculating the vectors properly.

Along with this improvement, we are now also properly accounting for the player’s collider size and calculating movement distance based on that to prevent players from warping into objects.

Many improvements and additions were made in the art department, making the game look very different and much more atmospheric. As detail passes continue, the looks of the background and midground art have greatly improved. The level as a whole is now completely detailed and the game’s look and feel is coming together.

Continuing on the theme of environment art, we decided to create vent and grate overlays for the platforms to break up the brightness of the lava platforms. We want the lava to glow (so it looks like lava), but the predominant lighting in the game should come from the neon colors of the characters. Our solution was to significantly reduce the amount of lava on the platforms by overlaying more metal pieces on the platforms. 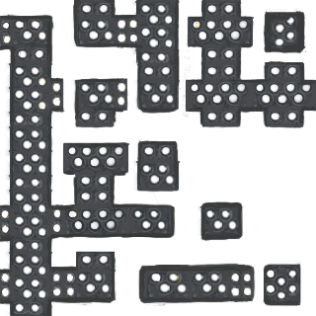 We have also recently decided to iterate on all of our UI art by turning it into vector art. Currently, all of the art in the game is raster art, which makes certain artwork difficult to scale if we need to. Since the UI could scale different based on different screen sizes, and as we iterate on the look of the UI, it made sense to convert this artwork.

Since atmospherics are a big focus for us, we have been spending a lot of time iterating on normal maps and seeing how they react to lighting in game. Our most recent iteration of the recharge station normal map is very close to how the lighting should react, and makes us confident that we can move forward with hand painting normal maps for the rest of our objects! Check out the normal map and its lighting effects below:

We have made quite a bit of new animations and VFX recently as our focus has been on giving the visuals in the game more character and more “punch”.

We improved the crouch pose to give it more character so it looks more in line with the themes of the game. We wanted the character to be closer to the ground in a sort of speedy / stealthy position reminiscent of the matrix.

Like the crouch, a lot of our animations are poses rather than animations with actual movement. This is because some actions need to feel really snappy, and can be accomplished by a pose without any movement. The wall hang was previously a pose, but we wanted to give it a bit of movement to give the player a dangling feeling when they are hanging on a ledge. Check the new animation below:

Since sprinting is a new feature in the game as of our previous sprint, we needed to develop a new sprinting animation to go along with it! The idea behind the animation was the angle the character forward more to make the running feel more laborious, as well as exaggerating the movements more. We will iterate again on this so that the gun is parallel to the character’s body since you cannot shoot while sprinting, but this works well as a first pass.

We spent quite a lot of time these past months working on the look and feel of characters switching bodies since it is a cornerstone mechanic of the game. This new animation shows the switch from the time one character teleports to another, and goes through the visuals of ripping off each character’s hoses, the characters’ color essences switching, and the idle pose of the characters being stunned before players regain control. We intend to iterate a lot on this and add more visuals, but check out the first pass below:

We are making great progress with our eye on GDEX in October as a time to showcase a vertical slice of our game. We are very excited to continue polishing and can’t wait to hear your feedback!