Good news everyone! With another full month of work in the books it’s time for our monthly recap again! We have finally made significant progress with core functionality of the game, and the art style is really taking shape. These are exciting times for us as we finally are able to import some art into the engine and get an idea of the world we are building! We pretty much met our goal for this month with a few exceptions, but we believe we have some juicy content to share with everyone and hope you get as hyped up as we are. Now let’s check out what work has been done with this months recap!

During this sprint, a number of mechanics for the game have been implemented. One of the new features that was added is character slide functionality. Players will be able to slide which will help them dodge projectiles or escape from an incoming enemy, granting a temporary speed boost. The slide mechanic can also be used offensively to get the jump on another unsuspecting player.

Another mechanic that has been implemented is the ability for the player to slide down a wall. This enables the player to slow down while falling to avoid falling into a pit, or time an attack from above on opponents. It will be exciting to see how people use this mechanic to their advantage!

A lot of existing mechanics and features have also been tweaked and iterated on. Through extensive testing we have been able to improve the aiming functionality of the character. To improve aiming, we are limiting the number of angles players can aim at to a finite number, which should greatly improve precision. Below is an image of all the different directions you can aim the characters line of sight.

A lot of other small aspects of the game have been tweaked such as the various ways players can move around an environment. This includes how fast a player moves, how fast a player falls, how high a player can jump and so on. Another mechanic that was tweaked is the improvement of the platform spawning system. We had to make sure that when the platform spawns from secondary fire, it spawns conscious of the collider size, so it would not clip through the walls of the level. We plan on having a visual aide to the secondary fire HUD and charging of the laser shot so players know when they are using the platform secondary fire.

In terms of art, a lot has been done this past month. We started the concept art of the incubation hoses, which are used to suspend the character from the top of the screen during character selection. Players can hover over suits with their cursor (P1, P2, P3, etc.), and once selected the character will jump down from the hose and become controllable. This design decision was informed by some of the lore we are building for the world these characters exist in, so stay tuned as more is revealed.

The environment for our first level has finally been implemented into the engine. This first environment piece is part of the first of many playable environments which have unique visual and gameplay characteristics. This means that our level now actually looks like it belongs in a world somewhere! 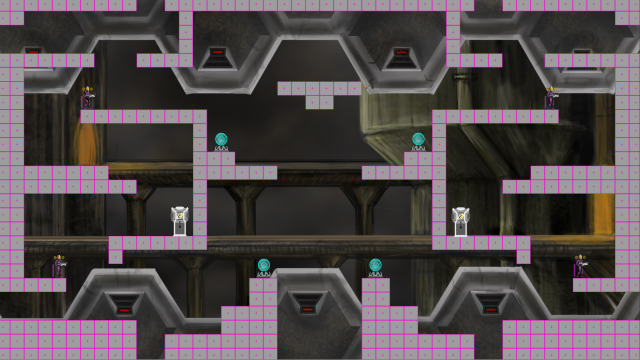 Along with many in-game assets, we started conceptualizing some visual effects for the character and weaponry. The laser shooting effect and the laser contact effect are going to be implemented for in-engine use within the very near future. This will give some aesthetic feel to shooting the main weapon for that you will now see a muzzle flash and the actual laser making contact with something.

Remember the two power-ups we talked about in the last recap? Well we now have the art for them in-engine so you know what power-up you have collected and which power-up is spawning at the power-up station!

Last recap we had the task of finding the right scale of the levels. With accomplishing that, we moved onto fine-tuning the level design so that there is a good flow to it when players are battling it out. With this level 1 we created, we opened it more so players have more freedom to move around and use all of the interesting movement abilities available to them! Below is a before level design and the new and improved level design comparison.

That’s it for this month’s recap! We hope you enjoyed the hard work we have put in this past month and are eager to play as much as we are eager for you to play as well. Stay tuned and connected on our social media for more weekly updates. Also, don’t forget to be on the lookout for next months recap for more insightful and detailed information on this game!