I know what you’re thinking: we said we would post every month at the beginning of the month and we already failed on that. Well…I have no excuse, but that doesn’t mean we haven’t been busy! The last two months we focused mostly on iterating on and implementing existing assets in the engine. Improvements were made to character movement, a totally redesigned character was implemented in the game engine with a couple basic animations, the character’s HUD was improved, and the flow of matches was redesigned from the ground up. We also attended GDEX and met a ton of awesome people who provided valuable feedback to the direction of this game. Now that you have an overview, let’s get into the update!

Wall hanging has been added to the game to increase the options players have when navigating a level. Use the wall hang to avoid direct fire when there is not cover, or to plan your attack before dropping on an unsuspected player! Vast improvements have also been made to ground sliding, giving players an opportunity to generate momentum and launch themselves across levels. If a player becomes airborne while ground sliding (either by jumping, or falling off a ledge), they will retain their momentum and can use that in combination with the jump kick to traverse large areas in quick fashion.

Comparing the old HUD to the new one, many things have changed. First and foremost, powerups have been added to the HUD allowing players to know which powerups are being carried, and other pertinent information related to individual powerups. When looking at the HUD, you may also notice that lives are no longer displayed. This change has occurred as a result of the previous redesign of weapon play (see the last blog post for more on that), allowing us to design matches around round wins rather than kills. Instead, progress is tracked at the end of a round by displaying how many rounds each player has won, until the game ends by a player reaching the necessary wins. 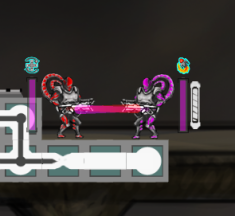 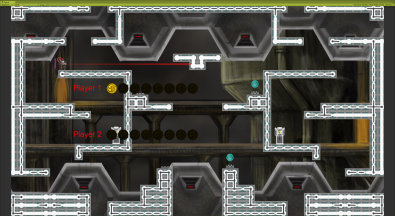 Your gun used to debilitate opponents just received a visual upgrade! Previously, we were using the same projectile image for primary and secondary fire. Now we have more appropriate art for the different shots which better exemplify their purpose. The primary fire is a standard looking projectile, while the secondary fire is a much larger charged ball of energy. This will allow you to easily identify what kind of projectile has been shot, so you may act accordingly.  Along with the various weapon improvements, there has been work done to character aiming and fast falling to help players visually during gameplay. 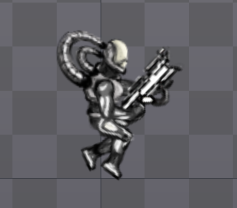 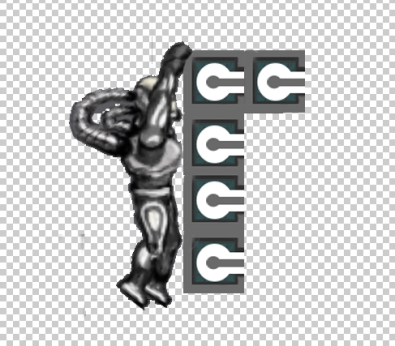 The game has made some exciting progress recently as each character’s suit now lights up with the selected color! In previous posts, you may see each character have a color overlay as a placeholder to determine the different characters, but now the color mechanics are working as they will in the live game. This new bit of art allows us to show you which character belongs to you (by the color of each character’s body), and the character that you are presently controlling (based on the color of the character’s head). This makes the body switching mechanics playable from a readability standpoint, and brings us much closer to our goal of a playable build.

As we continue developing in-game art and mechanics for the game itself, we also place importance on promotional art materials that look really cool and show gameplay / what you might experience as a player. The piece below took a really long time to create and we are happy with the way it came out. It shows off some of the core features of gameplay while looking super badass; we hope you like it! Speaking of visuals, a few new effects were created. Going back to the gun, the projectile laser was improved into three separate animations; the beam, energy lighting, and the tail. Although this new projectile laser will probably be iterated on again, this is a much closer representation of the look we are going for. When a player is shot, the player may be affected in one of two ways. If the player is not already slowed, the player will lose their outer shield and become slowed, which is now represented through a visual effect. If the player is already slowed and shot again, or the player is hit directly by the secondary fire of another player, the player will become stunned for a brief moment, which is also accompanied by a visual effect and animation.

We have also been developing ideas for what a player death might look like. To continue the theme of a futuristic, neon-colored aesthetic, we decided that we wanted to make the player death a sort of ‘phasing out’ effect similar to how a CRT television would look when you turn it off. This was all developed when player’s were still able to harm each other with their weapons, so we may need to revisit this later; however it’s looking pretty awesome right now!

Last but certainly not least, we are getting close to having all of the player actions animated for the characters. These are all still very rough animations in their early stages of creation, but as of right now most of the actions possible in the engine should have an animation attributed to them!

Not only have we been working on the game in the last two months; we also attended GDEX and had a great time! Thanks to everyone who came to the booth to check out Shark Thrower as well as some art we were showing off for this game. Check out our instagram for images and videos of the event. To everyone we met: it was awesome talking to you and we hope to see you next year! To anyone reading this who did not go: check out www.thegdex.com and think about attending the next event. It is a really great opportunity to talk to creators of awesome games and see exclusive content that you don’t normally have a chance to see.