We are back and refreshed from showing our game for the first time ever at the 2019 BOGS (Business of Games Summit) at OU! For those that saw us – thank you so much for checking out this VERY early version of our game and offering valuable feedback. We have already had a few meetings and plan to implement much of the suggestions we were given, and have some great new ideas on how to improve the game. For those of you that didn’t see us – we will be showing our game at other expos in the NEAR future and will continue updating the blog here so stay tuned. This recap will take a bit of a different approach since we were more involved in playtesting and gathering feedback last month, but should give you some interesting insight as to where we plan on going from here. 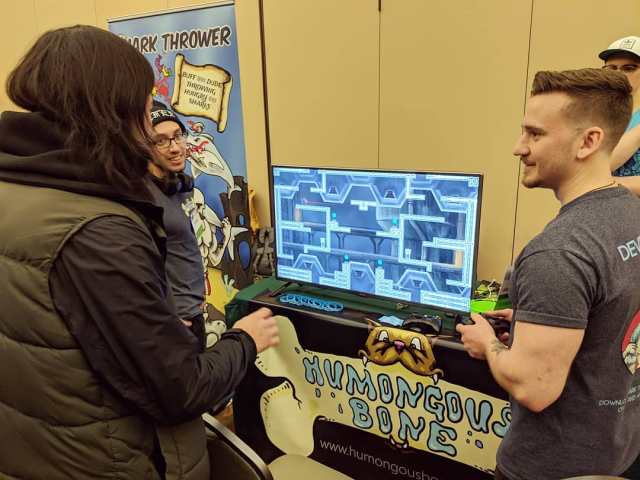 We talked about our game to a wide variety of people – from developers to professors and consumers, and it was great to hear different perspectives. One thing we heard repeated was how much people liked the pace of the game and how fast it felt. This feels great to hear as we have been deliberately building the game around quick movement and fast paced gameplay, so it is good to know we are already executing on that. Taking the good with the bad, we also realized that the game is pretty difficult to understand – even when the player is given an explanation of the mechanics.

In the coming weeks, we plan to add many more visuals and more exaggerated animations to sell the core mechanics of the game and make it more readable. The overall concept of the game is confusing, and from here it is our job to keep iterating on the visuals to make sure the gameplay is communicated effectively. In particular, players seemed to get confused when they switched bodies because there wasn’t an animation to show this happening. This coming sprint we will implement that animation, and play around with effects to make that the focal point and ensure players understand which character they will be controlling when the swap is over.

We had a discussion which almost caused us to start from ground 0 and rebuild the game – but ultimately we decided against it. We are focusing on detailing the artwork this sprint, and had a tough decision to make around LOD in the game. Since the camera is fixed, we have been building all of the artwork around the pixel density of a typical HD screen. Although it may seem like a lot, this doesn’t give us a ton of detail to work with so we are learning quickly how to maximize detail with a low pixel count. Each world unit accounts for 64×64 pixels, which is the size of a single platform on a level. As an example, the character is roughly 1 unit wide and 2 units tall, which only gives us about 128X64 pixels to work with. We played with the idea of scrapping the fixed camera with screen wrapping in favor of a dynamic camera and a much higher pixel count, but ultimately realized that this would greatly sacrifice the speed of the gameplay and the size of the levels.

As for now, it is full steam ahead on the current low pixel-count art style so stay tuned to see our techniques for making the most of it! By the end of this sprint, the demo level should start feeling a lot more like a world than it does now with all of the placeholder art.

Animations are getting quite a bit of an overhaul as well! We have about 90% of the character animations implemented in the game in a very early state, and plan on implementing first passes of the ones we are missing. Along with this, we have developed a new process to begin adding “character” to our animations to give the character a bit more life. This coming month, we will begin storyboarding much more intricate character animations to go along with our art style and fast-paced exaggerated gameplay. We are excited to see what we come up with and hope you are just as excited to see the process and how we develop our game world!

Thanks again to everyone that had a chance to play our game at BOGS – you guys are amazing! As we continue along the process of making this very early build into a full game, we cannot stress how important everyone’s feedback is to us. Please don’t hesitate to comment here or send any suggestions to info@humongousbone.com; we discuss ALL feedback together and implement the vast majority of it as features. YOUR ideas could end up being in the finished product and we hope they are. Until then, stay tuned on our website and social medias for continual updates.